This is bear country: Cycling the Denali Highway

After camping for a few days in the Denali National Park, we stayed in a tiny log cabin in the middle of a very rocky RV campground. (We have noticed on our adventures so far, that Alaskan’s seem to enjoy covering all campgrounds with a thick layer of pointy rocks). We met a fellow cyclist named Buddy, pulling a bright yellow bike trailer behind him. He carried several cold pies in his pocket and was munching on an chocolate ice cream. Sadly, he decided to move on - “these rocks are too pointy!” 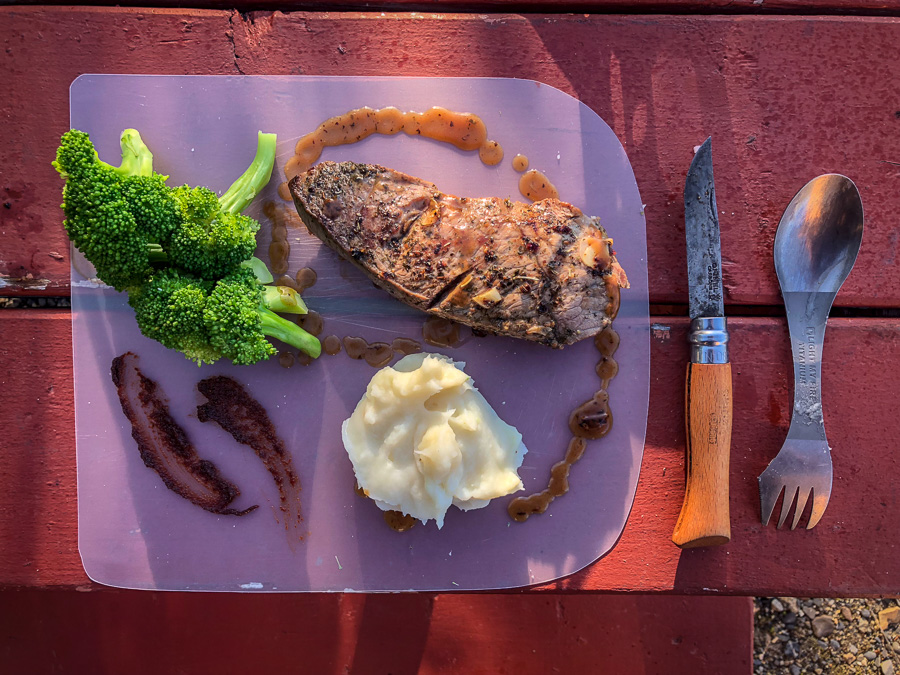 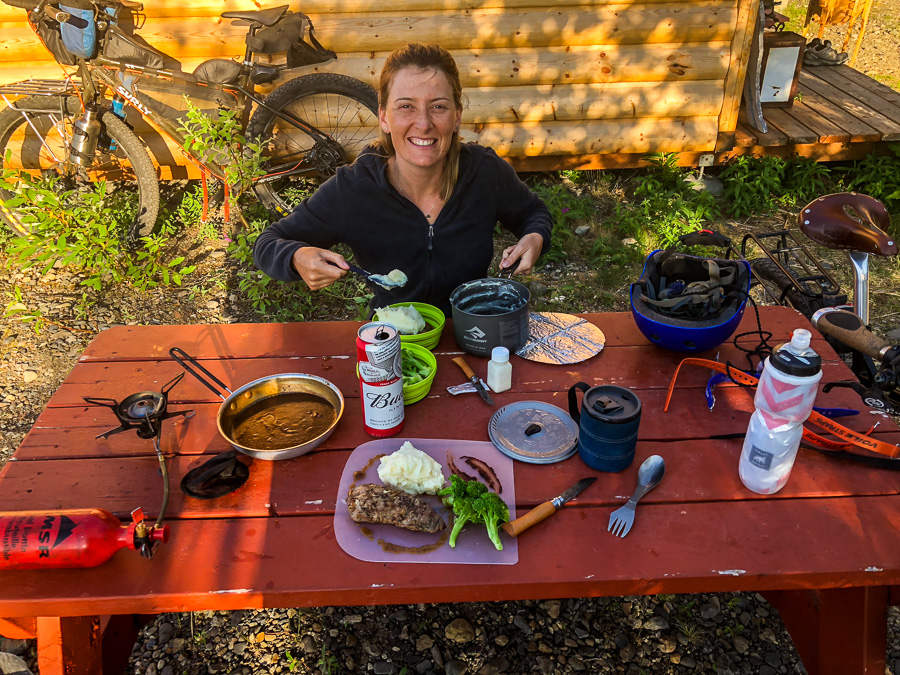 Jamie tried to hitchhike to our previous campsite, in search of our elusive tent pole (a mere 65kms away). Our lovely campground host spotted him on the highway and insisted on giving him an old van to borrow. “You can’t waste your rest day hitch hiking!”. Yet another example of the kindness and generosity of the people here. Sadly our tent pole had vanished (perhaps into the hands of a rogue bear?). Saggy tent it is!

That night we had delicious showers, cooked, napped, and prepared to cycle the Denali Highway. (More local pies may have been consumed - oh goodness, so delicious!). 215kms of wilderness and dirt road, the Denali Highway was originally the only way to access the Denali National Park and Preserve. We were eager to explore it! 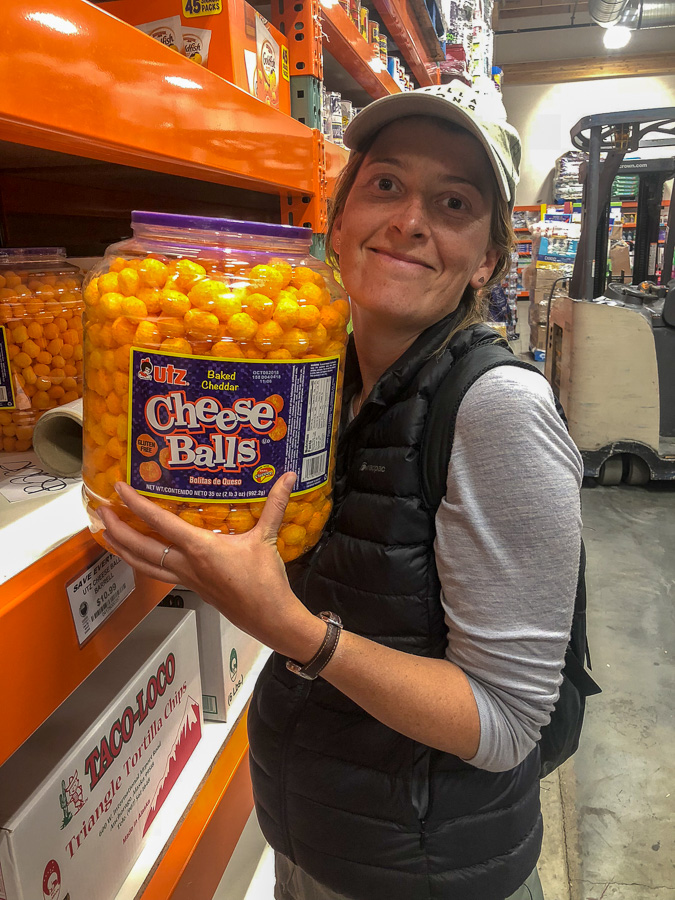 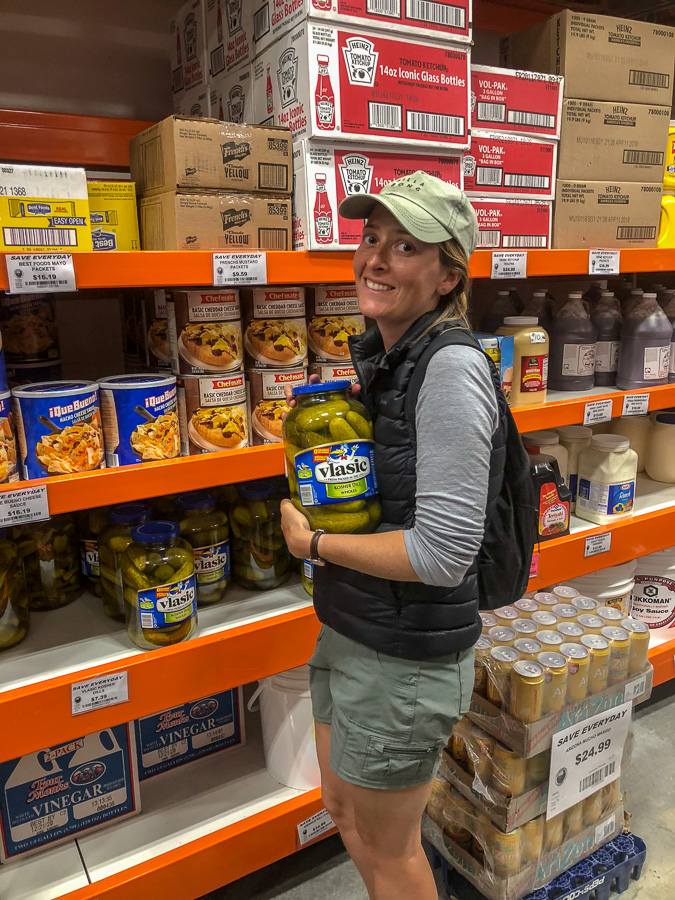 The next morning, despite our best efforts to leave early, we didn’t hit the road until midday. We accidentally ate another pie (“it’s lunchtime, might as well have another pie!”) before we left! 10 minutes in, we met Jim our campground host, fishing on the side of the road. We waved goodbye and headed into the wild.

Trees. So many trees. We climbed up hills for hours, with the burning sun on our backs and our mouths full of dust as each car passed. We looked longingly down at the cool river below us. Eventually, Jamie insisted we stop on the side of the road for lunch. I dropped my bike, and immediately wobbled to the ground, feeling faint. A car full of people passed, faces pressed up against the window. Who on earth would cycle out here? You’re crazy! Jamie pressed a delicious cheese, salami and tomato filled tortilla in my hand, and I felt better. Tomatoes are interesting. Throughout the first day while bicycle touring they hold their shape, texture and firmness. However by lunchtime the second day, they have turned to soup.

We cruised downhill, watching the ice capped mountains grow bigger. Above us, someone was learning to fly a plane; the jet stream swirling in figure eights. We passed a decorated Christmas tree by the side of the road in the middle of nowhere. Perhaps we’re hallucinating? At 6pm we arrived at Brushka Campground, a lovely campsite perched on the edge of a rocky river. We immediately jumped in, washing the days dirt away. A fisherman watched, bemused. We walked to the top of a hill, into a field full of cotton plants, with a view of the icy mountains. We grinned at each other, hardly able to believe where we were. Is this real?! We wandered back to our tent, passing an old Austrian man on a rusty motor bike and a cyclist named Greg, that we vaguely remember seeing at the Healy Brewery. We made an experimental Pad Thai (peanut butter, soy sauce, a FRESH lime and garlic - surprisingly delicious), and headed to bed early to escape the ruthless mosquitoes.

The next morning, while Jamie was making coffee (we cannot begin the day without one) he suddenly started shouting.

I stumbled out of the tent hurriedly, bear spray in hand.

I put my bear spray down.

“Yes! Or a sloth? Do they have sloths here?”

I looked where he’s pointing. It’s a porcupine. It’s huge! The porcupine waves it’s paw and wanders off into the bushes.

I headed down to the river. Suddenly I jump! Out of the corner of my eye, I saw what I thought was a grizzly bear cub running towards me. No!? Could it be? A wave of relief. It’s just a friendly golden retriever. She came over and put her head in my hand. “Where did you come from?” She looked up at me and then licked my knee. I put my hand in her fur. She was so soft! She eventually trotted off; smiling I returned to camp.

We began the day slowly, stopping to take pictures at every corner on the road - everything was so scenic! Another photo? Why not?! We stopped at a dusty pullout for lunch, with the best view so far - pink fireweed flowers everywhere, tiny lakes and huge glaciers. Jamie introduced me to a peanut butter, Nutella and banana tortilla. “It tastes exactly like Snickers!” It doesn’t, but was delicious. Covered in peanut butter, we continued our journey, until we arrived at Clearwater Lodge. The sluice bar was covered from head to foot in foreign money and antlers, and the bathrooms covered in old and dusty imitation flowers. Jamie went in to ask if they will fill up our insulated bottle with beer.

We camped next to Greg, the other cyclist, and sipped our last wine rations in the sun.

From Clearwater Lodge we cycled 65kms of dirt road, through ever changing scenery (lots of tundra!!), to Maclaren lodge. We had a well deserved beer on the deck, with a huge white polar bear dog with a wheat allergy. The lady in the bar pointed over the road to a little gravel pull out and told us, ‘that’s where the cyclists usually camp’. We trudged over the road with our bikes, up the hill to the little camping spot, and suddenly stopped in awe.

‘Look at that glacier!!’

‘I know - this is the best camping spot ever!’

‘And we have it all to ourselves!’

We turn around, and see Greg that cyclist, grinning from ear to ear.

After a $5 shower and a bowl of pasta, we curled up in our sleeping bags and went to sleep.

We woke early in the morning to the sound of rain on our tent. We hastily packed up, and trotted back over to the lodge for drip filter coffee and blueberry pie for breakfast. A ruddy motorcyclist pointed to our food and laughed - ‘you guys must be on holidays if you’re eating pie for breakfast!’. We nod, and watch as he feeds the polar bear dog some of his wheat toast. 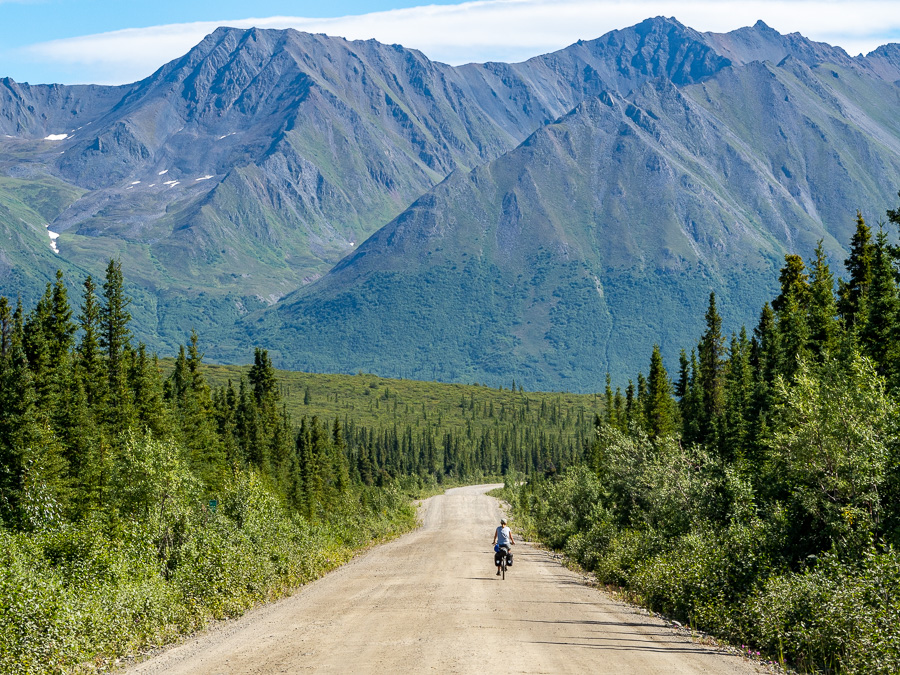 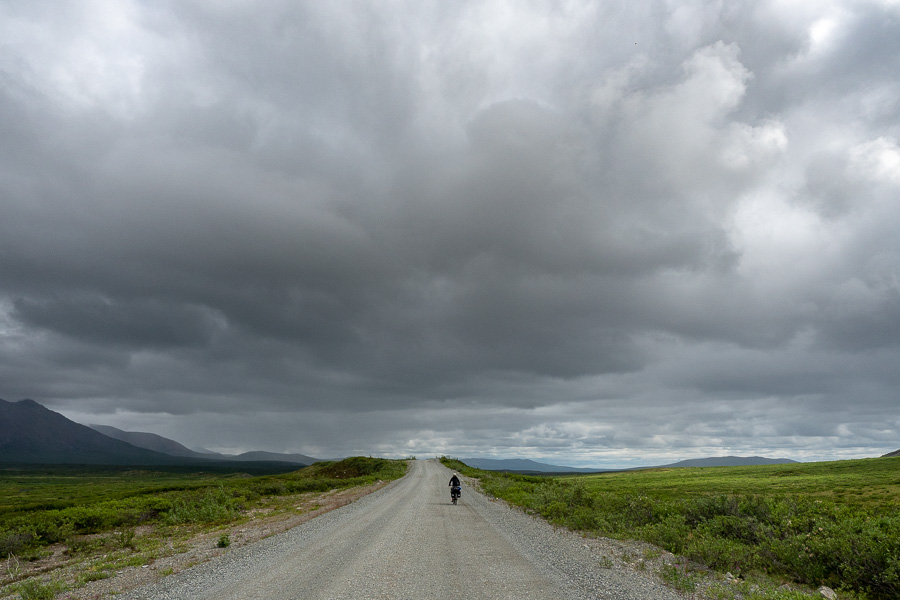 The rest of the day included a steep climb, followed by some amazing downhill cycling. As we roared down a hill, a Subaru stopped in front of us and Ann, Dustin and their two boys leapt out of their car. ‘WE FOUND YOU!!!’ They were so excited, and while pushing Alaskan beers into our hands, started bombarding us with questions about our trip. We assured them that we had been lucky with weather, amazing scenery and no flat tires (unfortunately for them they had two flat tires along the way!). They jumped back in the car, and drove off, madly waving all the way down the road.

We cycled on, until we reached Tangle Lakes campground ($6 - bargain!), where we bought our first bundle of wood and lit a fire. 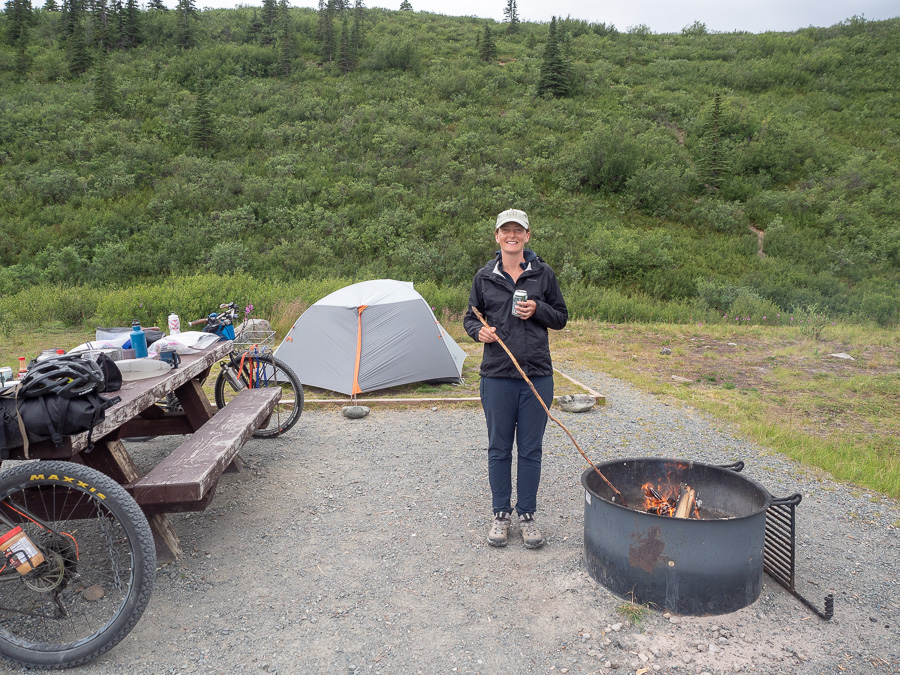 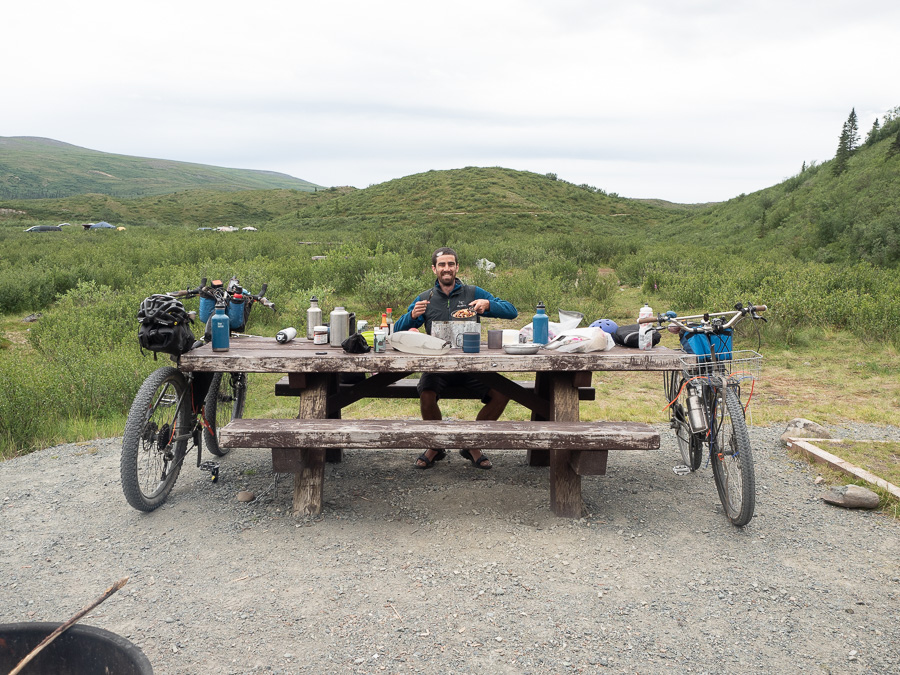 On the way out from Tangle Lakes the next morning, we stopped by at the lodge for pie (again). Delicious! Spurred on by sugar, we arrive at the end of the Denali Highway (Paxson) by mid afternoon. We bumped into 4 other cyclists, and a happy orange dog, heading in the opposite direction. We waved, and cycled on.

Past Summit Lakes, we found our campground for the night - a primitive campground with spectacular views of the Gulkana Glacier. We were about to hunt for water when Jim (everyone in Alaska named Jim is your friend!) drove up in a little golf buggy, and handed us ten bottles of water. He told us about his best friend who comes from Adelaide, and that he loves that we’re cycling. Smiling from ear to ear, he drove off, bumping over the fireweed with his two giant dogs. We went to bed, again astounded at the kindness and generosity of everyone we have met in Alaska.

Jamie woke me up at 6am for a quick hike to the bottom of the glacier, before we embarked on a huge 120km ride to Delta Junction (our biggest day so far!). Spurred on by the thought of a burger and a soft bed, the day flew by quickly (that was until we ran out of water!) Everywhere in Alaska so far there are streams of water, but suddenly it was as if we were in a desert! Luckily we only had 10kms to go, and arrived delirious in Delta Junction at 6pm. Confused and dehydrated, we booked into the cheapest accommodation we could find - a motel attached to a steakhouse! Conveniently delicious, and strangely reminiscent of Fawlty Towers.

The next day was a blur of planning (‘which way do we go next??’), washing our clothes (in the middle of a carwash) and packing. At 5pm we heard a loud knocking on our door.

We opened the door to find Jim, Bernice and Omi, standing there grinning, holding pizza.

‘We decided to come and visit!’

We had the most glorious picnic of pizza, homegrown raspberries, beer, bread and soup.

With their help, we finally managed to decide where we would point our wheels next.

And then the next morning we changed our mind. Again.

Further in to the red: Utah continued