The lessons we have learnt: Anchorage to Denali and in to the Park

We've all made mistakes. We've certainly made a few these last few days. But hey, where's the adventure if you don't camp in a berry patch in bear country, leave an essential part of your tent behind, or leave the tent open, allowing it to fill with a thousand mosquitos?

But we have certainly learnt a lot in a short space of time.

We have learnt that Americans are incredibly warm, friendly and generous. Well beyond our expectations.

We have learnt (and are still perfecting) the art of camping in bear country.

We have learnt that we continue to buy far too much food, and that long-life pre-packaged donuts from the petrol station are really gross.

We have learnt that although we think of Germans as liberal and free-thinking, they still get surprised seeing Jamie's bare bottom while washing in the river.

However we're getting ahead of ourselves. Now back to the start.

6.30am. We emerged bleary eyed from Anchorage airport after our night flight from Hawaii and were met by Jim, of our Warmshowers host family. What followed were a whirlwind two days of generosity, hospitality, preparation, conversation and delicious food. Jim and Bernice, Elise and Naomi, Merlin, Ella and Hershel, Teddy, Rabbit 1, Rabbit 2, Rabbit 3, and Chickens 1, 2 and 3 were our wonderful hosts. Not all of those family members were human - in fact only four of them were. Jim and Bernice, and their daughters Elise and Naomi have hosted a multitude of cyclists passing through, and if they shared with them even a fraction of the hospitality they showed us, well, my goodness. Jim became our own chauffeur, personal Costco guide, REI advisor, chef, and all round good guy. Bernice was our provisions specialist, guiding us through dehydrating mammoth quantities of pasta sauce and vegetables. She also supplied us with possibly the greatest, most wholesome energy ball known to man. Almond meal, figs and fairy powder were just a few of the hundred ingredients that went into these rocket balls. Elise and Naomi provided the entertainment and introduced us to their menagerie of dogs, cat, rabbits and chickens.

The day of our departure felt like saying goodbye to a family. The girls went of to work and camp, and we waved goodbye to Bernice. Jim cycled with us out of Anchorage, helping us navigate the network of brilliant cycle paths that lead out of the city. We didn't make it all that far and decided to camp at Mirror Lake. As we were about to start preparing dinner, Jim, who was still with us, suggested we wait just a little while. We were confused as to why, and so it was revealed that Bernice and the girls were on their way with pizza, chicken wings and beer! How incredibly lovely! And so ended our first night on the road. Well fed, and in good company.

However we still had one challenge. Bear-proofing our food. And as previously alluded to, we had a lot of it. Trying to hoist our heavy stash up into a tree on the hundred feet of thin rope that we had bought proved impossible. The swing set it was. We weren't really sure at this point how big bears are, but hoped they wouldn't be able to reach it. We went to bed in a children's playground, smeared in pepperoni pizza and honey soy chicken wings, hoping the bears had instead feasted on other campers.

The following few days became known as the avenue of trees. Alaska has a lot of them it turns out. 129 million acres of them. Some rain, some sunshine, and the occasional glimpses of the Alaska range spiced up this section. Still not used to bear country, every rock, every upturned tree, every shadow became a bear ready to pounce (I don't think they pounce actually). Sore bottoms, tired necks, aching thighs. We certainly were not in shape yet.

There was a fair bit of soul searching. Why are we doing this? We're tired. We're wet. The forests are full of murderous bears. I'm tired of looking at this never-ending column of trees. But these were all complaints of the bicycle touring naive. We had yet to settle in to our rhythm. To be honest, we still haven't found it yet, but I don't think we're far off.

But these lower moments soon passed, as there were so many good times, and things to look forward to. There were the lovely American grey nomads that populate the caravan parks, feeding us with salami, diced cheese and crackers. There were the squirrels. Oh the squirrels! What wonderful creatures, so full of mischief and humour. One of them tried to make off with my big toe, pretending it was an acorn. Another chewed through my cork handlebar grips. Yet another still played hide and seek with me behind my laptop - watch the video below!

And there was that time we met Shun the Japanese cycle tourist with his pants down.

Picture it. Day three, still wide eyed at the start of our adventure. We had yet to meet another cyclist on the road. And then just off the highway, a tent! And a bicycle! A friend! We turned down the track to greet our fellow traveller, only to find him performing his mid-morning bowel movements. Sheepishly retreating we hummed and haahed. What is the least embarrassing, to wait around to say hello properly, or risk running into him further down the road and awkwardly ignoring what had transpired? We never had to make the decision, as Shun came out to greet us a moment later, poop shovel in hand.

We met a couple from New Zealand touring around on their bicycles. They seemed a bit bummed about the whole deal. Bad weather, endless trees, it’s probably better in New Zealand they reckoned. However they had also previously toured in Iceland, France and somewhere else wonderfully scenic, so the bar was probably set quite high.

Flying downhill at speed we passed another man on a bicycle. A strange junkyard contraption it seemed, and he was clad in a garbage bag for weather protection, and large ski goggles. An assortment of dilapidated luggage was strapped to his bike. He was French.

Well, we made it to Denali National Park, and what a treat it is. After a six hour bus journey into the park, we arrived at our campsite, Wonder Lake, which was indeed quite wonderfull. We realised we were missing an integral part of our tent. Namely the tent poles. Well, one of the poles. We were still able to pitch our tent, but it was a little flaccid. The following day, I began cycling back out. Due to a quite rational fear of bears and moose, Gabi took the safer and possibly more sensible option and took the bus out as well. However by this stage, having not seen a bear, we were starting to joke that they were a mythical creature. In fact, I had almost convinced myself they were, until I saw a sow and her two cubs a few hundred metres away. But I was safe. I had bear spray. And then I read the label on the bear spray. It is apparently only effective within 9 metres of the animal. WHAT! You have to wait until this 400 kilogram killer is NINE METRES from you before you gently waft some pepper scented air in his face? No wonder everyone here is packing heat.

And then I met a fox. I wasn't prepared for this. Amped up on adrenaline I frantically trawled my brain to find out what you are meant to do in a fox encounter. Run from it? Scold it? Naughty fox. Stand your ground? I picked up a few rocks, and then slowly realised that it was just a fox. A happy little cunning, naughty little fox with surprisingly sharp looking teeth. Having regained my composure I greeting him with a genial "good morning". And you know what? He said nothing at all in reply.

We’re pretty much broke already. Alaska is really expensive. One tiny basket full of what amounted to a few thousand calories of junk food was 100 Australian Dollars. We may not make it to Argentina at this rate. We may never make it out of Alaska!

We ate a really good pie. In fact we ate five of them because they were so good. I don't know if Alaska has some strange South American influence going on, but I'd probably call them empanadas. Whatever they were, they were bloody delicious.

And tomorrow begins our next adventure: The Denali Highway.

As the sun slowly sinks here (at 10.30pm), we leave you with a photos of squirrels. 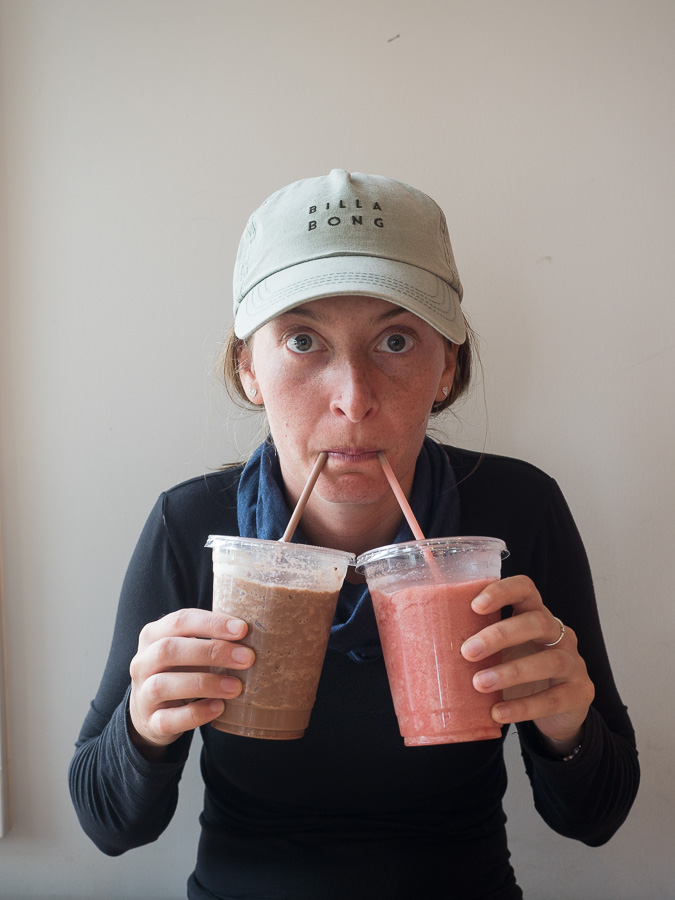 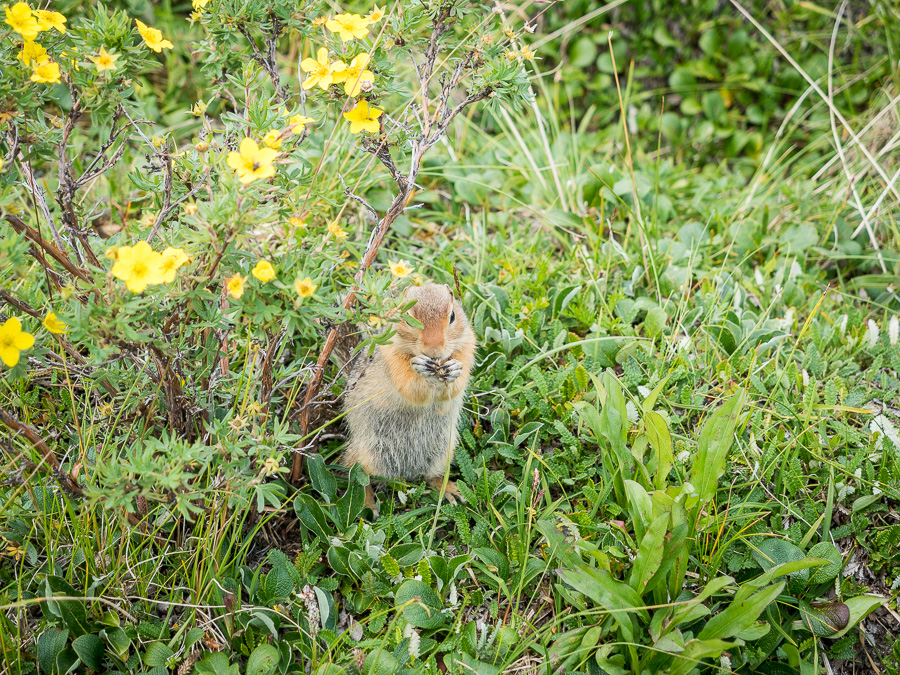 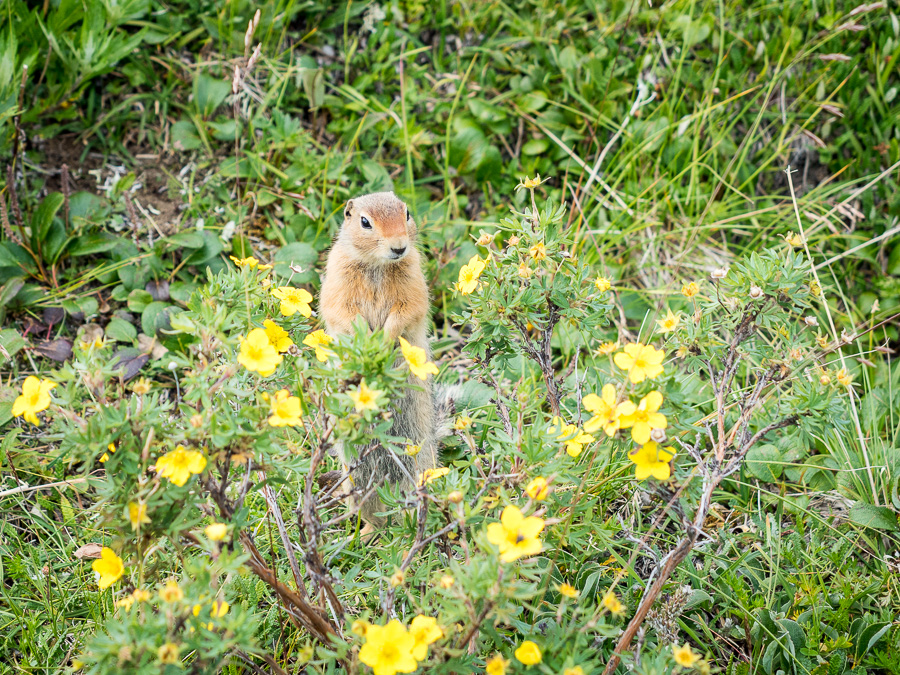 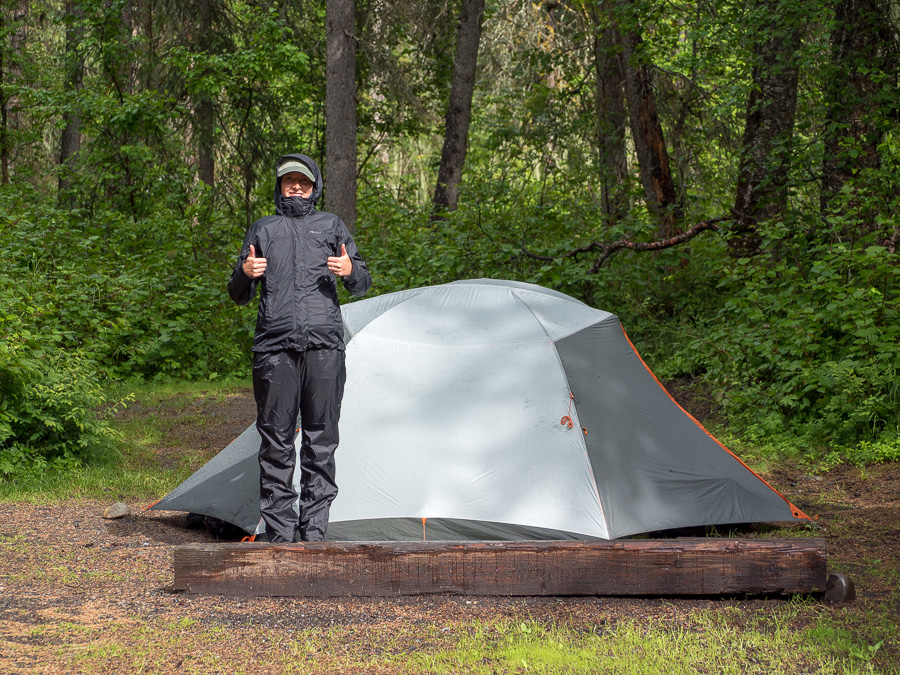 Further in to the red: Utah continued